Kansas City, straddling both Kansas and Missouri, sits perched on a bluff, high above the Missouri River. With self-proclaimed titles such as “Barbecue Capital of the World” and “City of Fountains,” we expected the city to be inundated with fountains and barbecue restaurants around every corner. There was a plethora of both, but we also found a city in the midst of a revitalization.

The “Heart of America” has spent billions to invigorate their city and they aren’t done yet! Within the last few years Kansas City has built a new sports arena, an aquarium, the eight-block Power & Lights district, and a performing arts building. The abundance of construction all around the city revealed other large-scale projects in the works. Slated to open in the near future is a downtown streetcar and an 800-room Convention Center Hotel.

Not only did the revitalization surprise us, so did the culturally rich areas, new audacious architecture mixed with distinguished historical buildings, and the extensive size of the city. We gorged ourselves on barbecue, were enlightened by the flourishing arts scene, engrossed ourselves in history and drank ourselves silly. 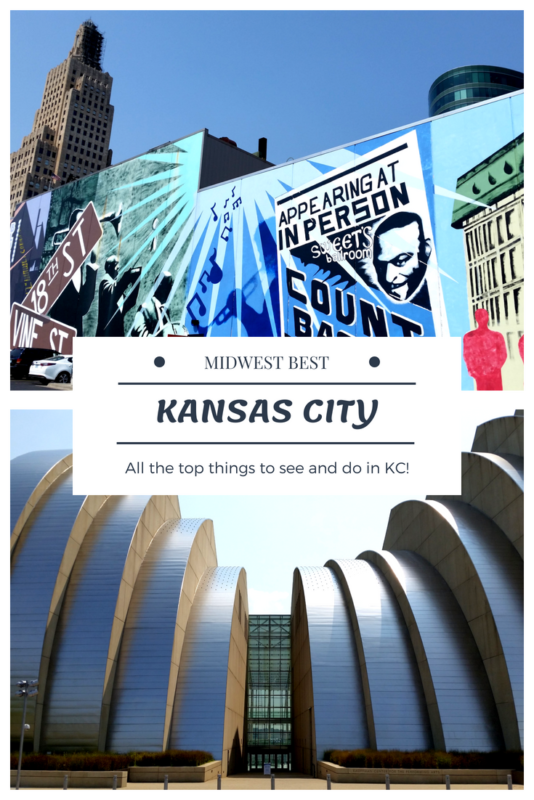 Top Things to Do in Kansas City

Meet me at the Crossroads takes on a whole new meaning in KC. The eclectic Crossroads Art District was our favorite area to explore. The industrious district is booming with art galleries, restaurants and local breweries.

The dynamic and vivid street art was electric. It was so extraordinary, we decided it deserved a post of its own: Thriving Art Scene in Kansas City. Kansas City prides itself on being the primo spot for barbecue. Get sloppy and taste test your way through slow-cooked brisket, tender ribs, and peppery bark-crusted burnt ends. That’s what we did!
There are hundreds to choose from; some of the more popular restaurants include Arthur Bryant’s, Joe’s, Fiorella’s, Gates, and Danny Edwards. The National World War I Museum has a unique approach of using WWI soldiers and their personal stories to illustrate their journey during the catastrophic war. Interactive exhibits, descriptive videos, and replicas of propaganda, guns, and trenches are displayed throughout the museum.

One of the most emotional moments is walking over a glass bridge, hovering over a field of 9,000 poppies, each representing 1,000 lives lost. It is a stark reminder of the 9,000,000 people who perished during the global disaster. Tip: The view from the top of Memorial Tower is the best of the city. At the top of our list is Cinder Block Brewery, just north of the river. Its welcoming atmosphere, friendly staff and excellent beer made it our favorite stop. The Weathered Wit and Block IPA were so good we thought of skipping out on the rest of the local breweries.

In the same industrial neighborhood, Big Rip Brewing Company has recently opened its doors. Not as welcoming as Cinder Block, but the beer was decent and they have an outdoor patio. Boulevard Brewing Company, the largest specialty brewer in the Midwest, is a staple of Kansas City. The free tour was entertaining and they offer samples at the end.

It’s not often that a five-star attraction is free. Take advantage and be inspired as you slowly make your way around the Nelson-Atkins Museum of Art.

Their Asian art collection is extensive along with collections of American, American Indian, Egyptian, and European Art. The Donald J. Hall Sculpture Park, attached to the museum, is a joy to walk around or to sit and relax. Head down to the City Market to find a group of diverse eating options including Ethiopian, Italian, Mediterranean, Mexican and Italian.

It felt more like a World Market; the aroma of Indian spices to French baked goods filled the air. KC Royals’ billboards lined the highway as we drove into the city, expressing everyone’s excitement over the 2014 and 2015 season. We caught a ballgame at Kauffman Stadium and although we are White Sox fans, we have to admit the park was commendable.

The prices for parking and food are reasonable and the beer was the same cost as our home turf. Reminiscent to our time in St. Louis, the crowds were blazing with local pride. The tranquil rose garden at Loose Park provides respite from the city. With over 4,000 roses of nearly 168 varieties, the garden is captivating.

Walk, ride bikes or have a picnic lunch in the 75-acre park just south of the city. The city is a blending of old and new with the latter being demonstrated at the Kauffman Center for the Performing Arts. It looks like something right out of a sci-fi movie. It has all glass on one side and steel wave-like shells on the other. The sleek, modern design makes a bold statement of the awakening the city is going through.

Union Station is elegant and grand, constructed with limestone and granite and adorned with deep-set archways. The Grand Hall inside is furbished with dazzling chandeliers and ornate ceilings. The Kauffman Memorial Garden is the final resting place for the influential couple whose name is strewed across Kansas City. It would be difficult not to recognize their prominent legacy that lives on throughout the community: Kauffman Performing Arts Center, Kauffman Stadium, Kauffman Foundation and Kauffman School.

The walled garden is a peaceful oasis that showcases playful fountains, vivid flowers, and enchanting bronze statues. At only 2-acres, this small garden provided a refreshing and tranquil reprieve from the city. Country Club Plaza is an upscale, Spanish-inspired shopping district flushed with restaurants and shops. The streets are lined with colorful potted plants and ornamental fountains.

From the Plaza you can easily make your way over to the riverfront for a stroll. 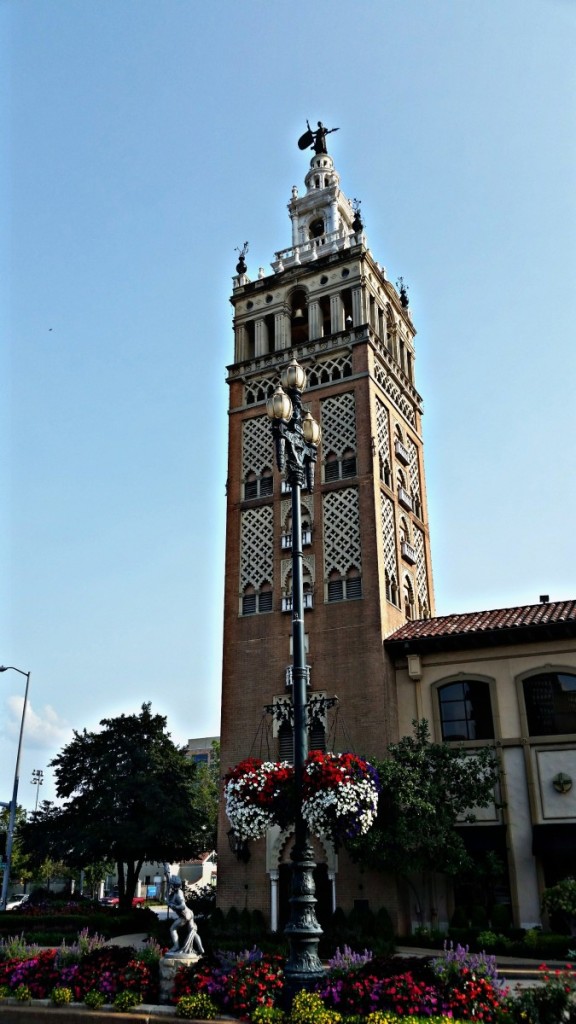 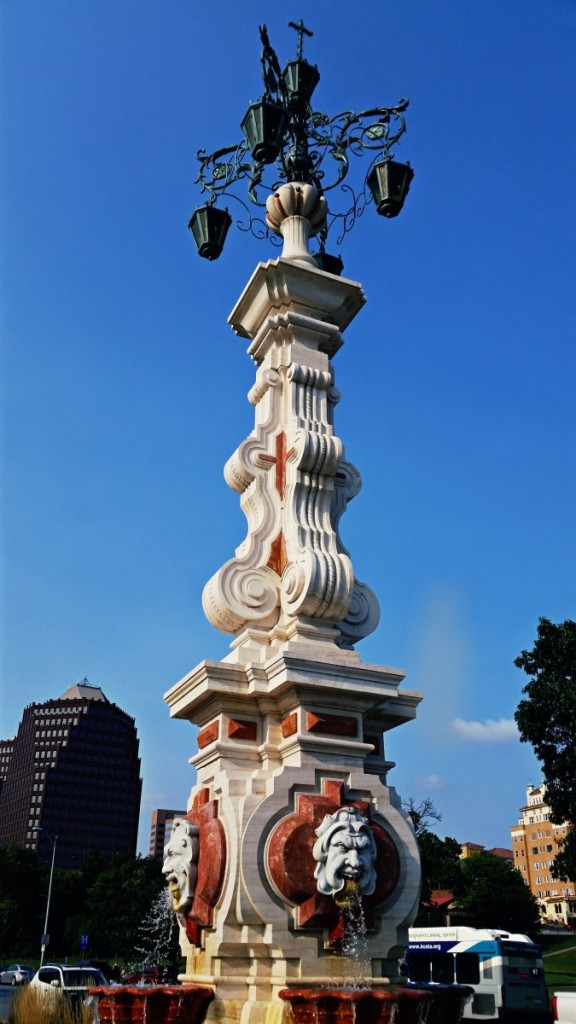 The Up-Down Arcade Bar will take you back in time to the aqua net and neon days. Classics such as Pac-Man, Gauntlet Legends, and Double Dragon fill the arcade area. Posters of Chunk from Goonies, Ghostbusters, and Urkel line the staircase to their trendy outdoor area with giant Connect Four and Jenga games.

And if that’s not enough, 48 craft beer tappers line the wall under a group of four televisions, all playing 80’s themed shows. Even though we found Kansas City has multiple nicknames, we don’t think any really capture the true essence of the city. We were tickled by its enthusiasm and positive vibe so we deemed it, “The High-Spirited City of the Midwest.”

Looking for other fun trip ideas in the Midwest?

What are your favorite things to do in Kansas City? 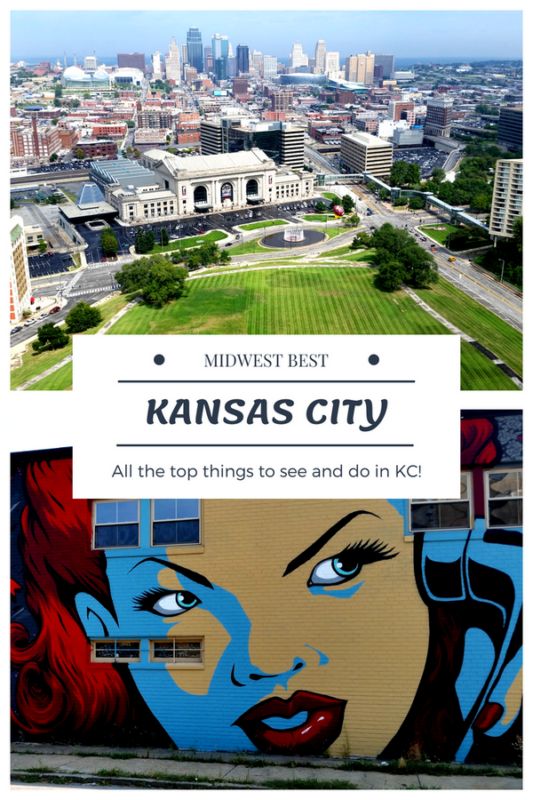