At first glance, St. Louis, Missouri doesn’t seem to be much more than the iconic Gateway Arch and the mighty Mississippi, but the past few years we have really grown to love the city. It has so much to offer and definitely falls under our budget-friendly category, with many of the major attractions being free.

See below for our favorite top 10 things to do in St. Louis.

The remarkable Forest Park is 500 acres bigger than Central Park. It is hard to see the magnificent grounds on foot so take a bike ride.

Bring your own or rent a bike. If bicycling isn’t your thing, you can see a majority of the park by car. Remnants of the 1904 World’s Fair can still be found in the park today. It drew more than 20 million visitors including the likes of Helen Keller, Geronimo, and President Theodore Roosevelt.

In the summer, events like Fair St. Louis transform the park into a giant musical oasis filled with food, fun, and fireworks.

The park is beautiful year-round, but our favorite time of year is in the fall when the leaves are changing.

Stop by the Forest Park Boathouse restaurant any time of year for drinks or lunch. In the warm weather watch, the paddle boats whiz by with an ice-cold local beer or glass of wine.

When the temperature drops, warm your feet up by one of the many fire pits while enjoying a hot chocolate. Stay at The Cheshire, a traditional British inn with the coziest tavern and most unique rooms in the city.

READ NEXT: ROUTE 66 ADVENTURES IN MISSOURI The world-class St. Louis Zoo is embedded within Forest Park. It is beautifully landscaped and has a large variety of animals. In 2015, the zoo opened a new polar bear exhibit with Kali as the main star.

It’s hard to believe that this fantastic zoo is free! Parking is not free, but if you get there early, you can park along the street just outside the entrance at no cost. Even if you don’t have kids, the zoo is one of the top things to do in Saint Louis. 3. Check out the Soulard Neighborhood.

It’s like Boston and New Orleans got together and had a baby. The French-inspired streets are lined with red brick buildings and sidewalks to match. It’s less than two miles from downtown St. Louis and is one of the oldest neighborhoods in the city.

The Historical Soulard Market has been a fixture of the city since 1779. Vendors sell various products including fresh produce, baked goods, spices, and flowers. Parking meters surround the market but if you drive a few blocks over, you can park for free in the neighborhood.

The big debate in St. Louis is which BBQ joint is better: Bogart’s or Pappy’s. Since Bogart’s is one block west of the market you can hop over and try it out. We like the ribs and pulled pork.

There are many bars and restaurants to choose from in Soulard. John D. McGurks has great food, live Irish music every night, and the patio is absolutely gorgeous. Molly’s is another great bar that has a New Orleans style menu. They’ve got plenty of outdoor seating in a fun atmosphere. At night, the nearby cathedral is lit up making an impressive backdrop to the festivities.

Speaking of cathedrals, this brings us to #4. 4. Gape at the Cathedral Basilica of Saint Louis.

The Cathedral Basilica in the Central West End area rivals some of the most impressive churches of Europe. It boasts one of the largest collection of mosaic art in the Western Hemisphere, with 41.5 million pieces.

Self-guided tours do not require reservations but make sure to call before visiting as mass and other events may be private. The Missouri Botanical Garden is one of the most enchanting gardens we’ve visited -and we’ve been to a lot!

The Japanese Garden is 14 acres of pure tranquility. They charge an admission fee, except for Wednesday nights in the summer when they provide free entertainment during the Whitaker Music Festival.

Arrive early to walk through the park and see the spectacular gardens before the band starts playing. Visitors are allowed to set up a picnic with food and drink (including alcohol) around the stage. One of the best things to do in St Louis for couples is to grab a bottle of wine and a few snacks and settle yourself in for a great evening.

READ NEXT: THE BEST 25 FOODS TO TRY IN ST. LOUIS

Looking for fun things to do in St. Louis for adults? The has a plethora of breweries to choose from including Civil Life, Schlafly, Urban Chestnut, Square One, Four Hands, and Morgan Street Brewery.

We’ve enjoyed them all for their own reasons. Civil Life for exceptional beer in a fun setting. Schlafly for their convenient location in the heart of the city with dedicated parking (get their mussel appetizer). Urban Chestnut is perfect when you want German-inspired food and beer. Morgan Street Brewery is right on the landing, which makes it a wonderful place to have a few beers when near the river or spending time at the Lumiere Casino. Four Hands is close to the farmer’s market and a great place to have a craft beer when doing a pub crawl in Soulard.

If you are short on time or looking for a one-stop-shop, head over to The Flying Saucer or Bridge Tap House. They both offer a wide selection of beer including local favorites. And don’t forget Anheuser-Busch, even though not known for their craft scene, has called St. Louis home for over 100 years. The brewery offers free tours with samples and you can see the infamous Clydesdales. 7. Spend a few hours at the City Museum.

The City Museum is a one-of-a-kind museum and one of the most unique things to do in St. Louis. The museum serves adult beverages and has everything from 10 story slides to buses hanging off of rooftops.

It’s the ultimate playground housed in an old shoe factory, climbing around the museum will make you feel like a kid again. It also includes a few historical artifacts, but mostly it’s an awesome place for adults and kids alike. Spend the day in a sea of red as Card fans come out to cheer their team. The stadium offers a great view of the city skyline and the arch. They even mow an arch in the outfield!

Get the build-your-own-nachos at El Birdos Cantinas and you will not be sorry. If you don’t want to spend the money on a ticket, head over to Ballpark Village. The plaza is an excellent place to watch the game since it has a 40-foot LED screen.

The Village is a new addition to the area and also includes a one-of-a kind retractable glass roof, a stage for live concerts, and multiple restaurants and bars. It is a park underappreciated compared to its big sister, Forest Park. It should be called an arboretum due to the hundreds of types of trees located in the park.

We love to walk and ride bikes here. We watch birds swim in the fountain and check out all the pavilions, each with a unique and different theme.

Offered every second Friday of the month during the summer is Food Truck Friday, where over 20 food trucks come together in the park. There is live music, local beer, and of course tasty food sold from the trucks. It’s another great opportunity to watch the locals enjoy all their neighborhood has to offer. The Arch and Union Station are landmarks we only visit once every few years but are a must-do for those visiting the city for the first time.

The Gateway Arch symbolizes the gateway to the west, is an unforgettable sight, and was recently designated the first national park in Missouri.

You can see it from the bottom or you can take an egg-shaped elevator (not a trip you want to take if you’re claustrophobic) that takes you to a viewing area at the top of the arch.

Here the little windows allow you to look over the city to the west, and across the Mississippi to Illinois in the east. If you visit in the summer make sure to check out Fair St. Louis, a festival on the river.

Union Station was once the busiest and largest passenger rail terminal in the world. Now a marketplace, the station has many restaurants and bars.

Check out the Tiffany stained glass and free light show at the Grand Hall in the attached hotel lobby.

*Union Station will also soon be home to more than 13,000 animals when the aquarium opens.* What are your favorite things to do in St. Louis?

Want to read more about our adventures, sign up below! 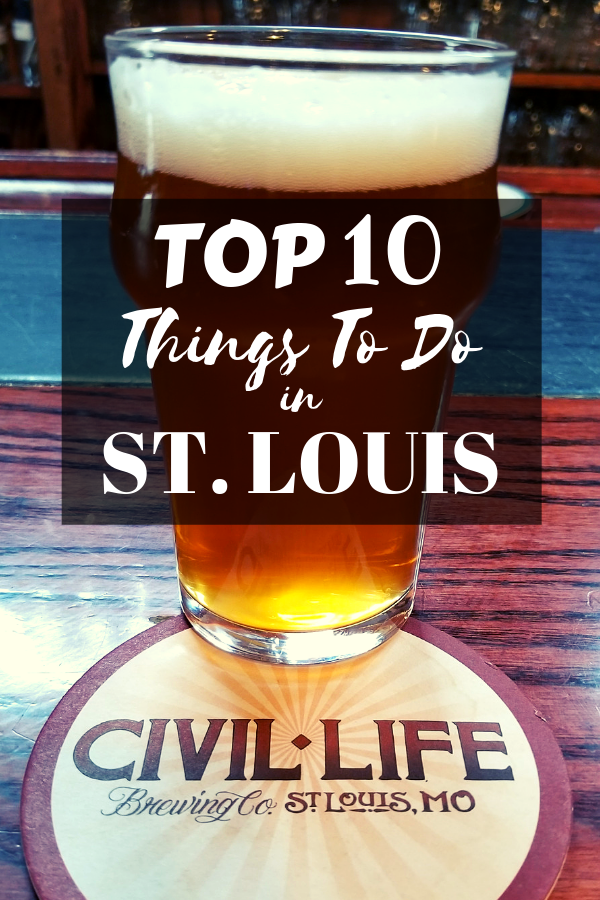 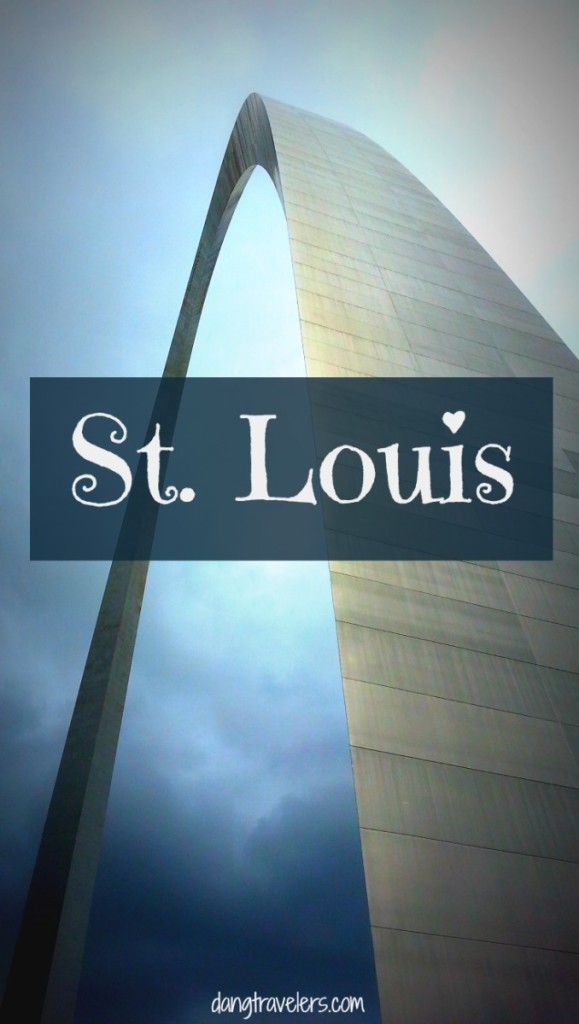