Cape Girardeau is situated on the banks of the mighty Mississippi River, just 115 miles southeast of St. Louis and 175 miles north of Memphis. The area was originally inhabited by Native American tribes until a temporary trading post was established by a French soldier, Jean D. Girardot.

Sixty years after he moved on, Louis Lorimier permanently settled down and so was the beginning of Cape Girardeau.

Afterward, click here to read about my favorite 15 things to do in Cape Girardeau!

The settlement of Cape Girardeau was established before the first shots of the Civil War rang out, prior to Missouri’s induction to statehood, and even earlier than the Louisiana Purchase.

It rose to glory during the steamboat era and was brought to its knees with devastating fires and floods throughout the years. Cape Girardeau is still standing strong and is oozing with history. What better way to portray an area’s history than colorful art in a dramatic fashion? The floodwall along the river provides a canvas for the thought-provoking 24-panel mural. It transports you along on a detailed account of Cape Girardeau’s historic past. The importance of the scenes are described in detail on signs along the path and there is also an audio tour that can be accessed with a cell phone.

See below for some of our favorite depictions. The river tales mural is a wonderful introduction to Cape Girardeau! 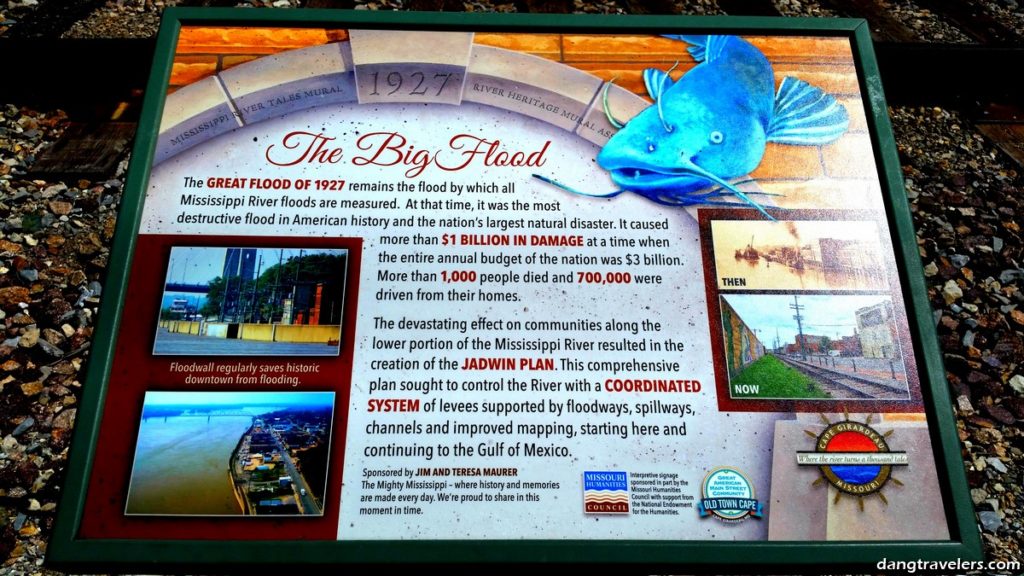 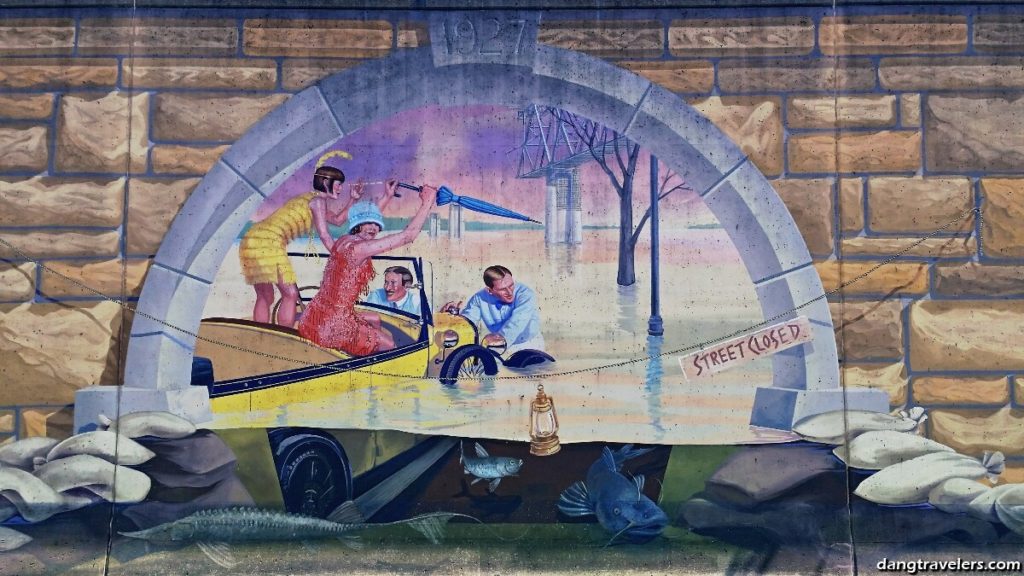 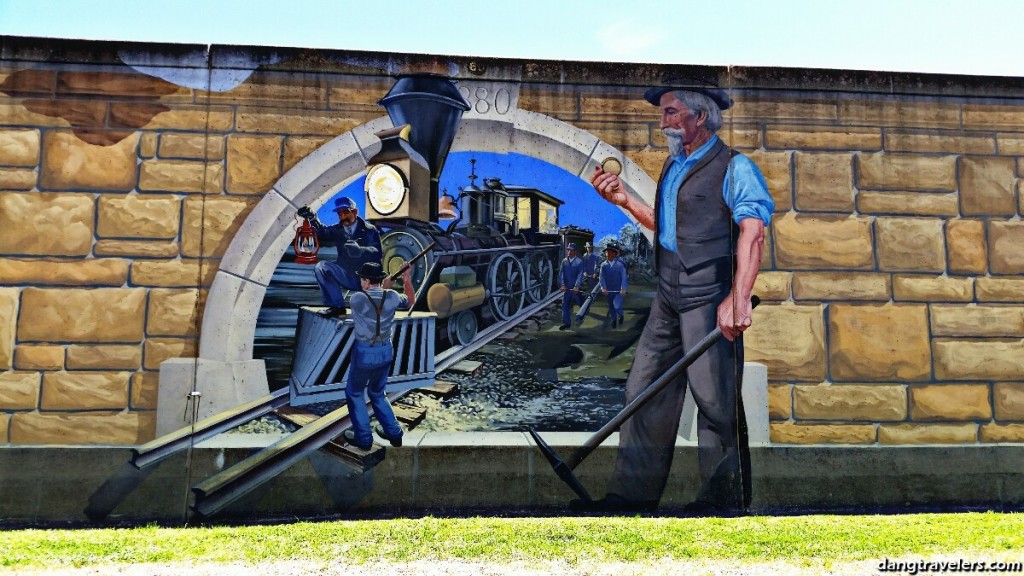 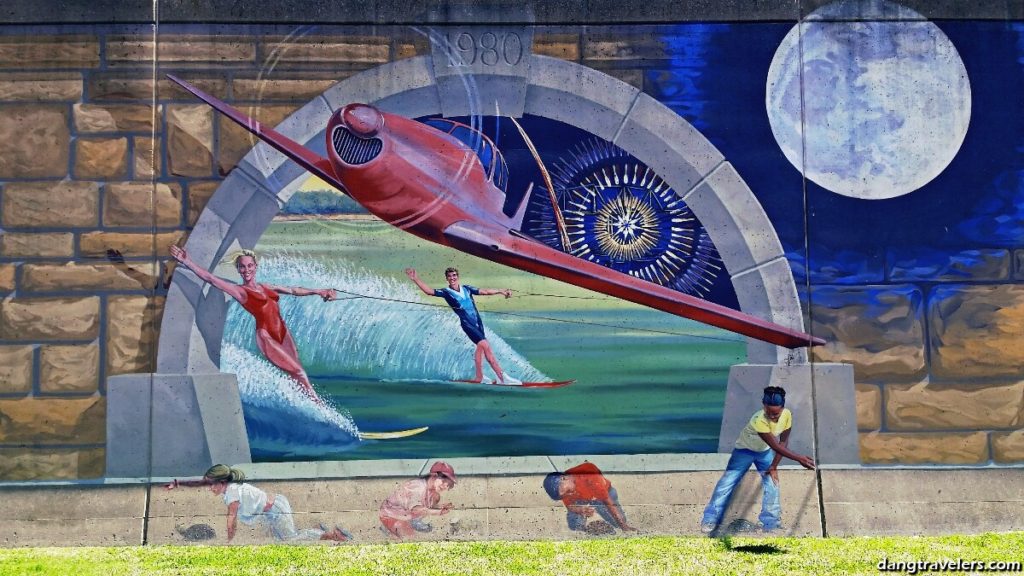 Adjacent to the River Tales mural is the Missouri Wall of Fame, another mural depicting distinguished Missouri-born figures and residents who rose to notoriety while living in Missouri. Did you know Rush Limbaugh, the radio personality, was born in Cape Girardeau? So was Marie Elizabeth Oliver, the creator of the Missouri state flag.

We learned that over the years, Missouri has been home to some influential historical characters like Mark Twain (author), Dale Carnegie (author of How to Win Friends and Influence People), T.S. Eliot (poet), Jesse James (outlaw), Harry S. Truman (33rd President) and Laura Ingalls Wilder (author of Little House on the Prairie series).

Visit the spot where it all began in 1733 when the area was used as a temporary trading post. The original cape, a piece of land that jutted over the river for which it received its name, was destroyed during railroad construction.

Even though the original area is changed, the city commemorates the location and provides an expansive view of the Mississippi River.

In the 1830s, Native Americans were driven from their land and forced to relocate from Tennessee to Oklahoma which later became known as the Trail of Tears. Thousands of Indians died during the involuntary journey in the midst of winter.

Rain, snow, freezing temperatures, hunger and disease were all variables working against the tribes. Unfortunately, it is a reminder of the harsh reality of America’s dark history. Trail of Tears State Park marks the spot where nine of the thirteen Cherokee Indian groups crossed the Mississippi and set up camp.

Just last year, Native American human remains were discovered by a family hiking on one of the trails. The park remains open but the trail is currently closed for further examination of the area.

It’s hard to imagine the pain and suffering of the tragic event when taking in its beautiful surroundings. Today, the park has a lake, swimming beach, and miles of hiking and backpacking trails. We spent half a day exploring the woodland area. The leaves are just starting to appear and the lake provided a serene backdrop for the day.

Make sure to stop in the Visitor’s Center (closed December – February) to watch a short film on the history of the area.

The stately courthouse, built in 1854, sits in a commanding position overlooking downtown Cape Girardeau. During the Civil War, it provided a headquarters to the equivalent of a current day military police group and as a jail for disloyal locals, apprehended rebels, out-of-line Union soldiers and anyone awaiting trial.

Today, it overlooks the city at one of the highest points and provides a place for Tunes at Twilight, a free Friday night concert that starts in May. Ever since I read Gone with the Wind  by Margaret Mitchell, I have been slightly obsessed with the Civil War. We always try to visit sites that played a role in the war in any area we visit. Cape Girardeau had sympathizers for both sides, yet Union forces mostly occupied the city. Four forts (Forts A – D) were strategically constructed by Union troops to protect Cape Girardeau. Fort D is the only fort still standing and provided a river defense during the war. Although it was not the location of the Battle of Cape Girardeau where 24 Union and 30 Confederate soldiers died, it stands as a reminder of America’s tumultuous past.

The Bollinger Mill State Historic Site is just a short drive northwest of Cape Girardeau. You will find a 4-story stone and brick mill and Missouri’s oldest surviving covered bridge. You can tour the first floor of the mill for free and pay a small fee for a tour of the upstairs. With the exception of the stone foundation, the original mill was burned down by Union forces during the Civil War. In 1867, Solomon R. Burford rebuilt the mill with brick that was placed on top of the remaining stone.

The Burfordville Covered Bridge suspends over the Whitewater River and is reminiscent of simpler times. The combination of the bridge, small waterfall, and rustic mill surrounded by the countryside is a charming sight.

Chasing history in Cape Girardeau County is a great way to spend a weekend. The historic buildings and sites are well-preserved, making Cape Girardeau a fantastic stop for history buffs.

We stayed at Auburn Place Hotel & Suites right off of I55 about 10 minutes from downtown Cape Girardeau. It’s in a great location, has a complimentary hot breakfast, snacks in the evening, free wifi, an indoor pool, hot tub and fitness center.

Thank you Cape Girardeau CVB and its associates for providing accommodations for us in the city. All words and opinions, however, are my own.