If there is a capital city en route or close enough for a detour, we always try to add it to the itinerary. When I saw that our North Dakota road trip was taking us right through downtown St. Paul from St. Louis, it was time to plan a few days to uncover the most cherished places of the city.

Some people shudder at the thought of an urban vacation. Congestion and crowds come to mind, but that doesn’t mean you can’t find incredible places hiding within the confines of city limits. Although I hate the term, we have some Instagram-worthy locales here.

Discover tranquil green spaces, architectural wonders, grandeur art, and historic landmarks so you know where to go when you come to visit Minnesota.

Not only are these places stunning but they are also fun free things to do in St. Paul too!

Since we pull into the St. Paul area a few hours before check-in, we point the GPS at Como Park, a place we know we can stretch our legs after a long drive.

The park is home to the zoo, a conservatory, a lake, paved trails, a public pool, and a golf course. There’s a lot going on in this 450-acre playland!

Even though the path around Como Lake is easily walkable at only 1.67-miles around, we take our bikes off the rack and plan to ride. The bikes have been dragged around with us for 1,500 miles to and from North Dakota on this road trip and have yet to be used.

After five minutes on the designated bike lane, we figure out what “Minnesota nice” is.

We pass several other bicyclists and walkers and everyone politely smiles at us, no one shouting out that we are going the wrong way. It wasn’t until I saw an arrow pointing in the opposite direction that we realized the path is a one-way situation. Oops.

A gradual slope takes us down to the water where we see Lakeside Treats, a concession stand selling snacks and ice cream, and Wheel Fun Rentals, a booth renting kayaks, canoes, pedal boats, and paddleboards. A nice option to get out on the water.

After pedaling our way around the lake, we head over to the most popular area of the park the Como Zoo and Marjorie McNeely Conservatory.

The large glass greenhouse is hard to miss, the design reminds me of the Crystal Palace we saw in Madrid’s Buen Retiro Park but this one is a tropical paradise underneath.

The Como Conservatory has been the home to exotic flowers and plants for over 100 years and is a staple in the community.

Today, it has two acres under glass with roughly 50,000 plants from 1,684 separate species including orchids, bonsai trees, ferns, and seasonal flowers. The conservatory manages nine gardens – six indoors and three outdoors – each one simply enchanting. Do not miss the Japanese and Sunken Gardens.

Details: Both the zoo and gardens are free, but a suggested donation is mentioned for basic upkeep.

RELATED: BIKING AND BEER IN ST. PAUL CRAWL – A MATCH MADE IN HEAVEN

Second on our list is the Minnesota State Capitol, prominently situated on a manicured campus overlooking downtown St. Paul in all its white and gold glory.

When touring capitol buildings we usually go at it alone so we don’t have to be lumped in with a group. But we were told, the tour is something not to miss. So of course, we were intrigued.

Muffled oohs and ahs could be heard from everyone in the group as we were brought into the Governor’s Reception Room. It’s one of the most elegantly designed government rooms I’ve ever been in with dark wood panels and gold-tinted crown molding.

Detailed artwork hangs on the walls depicting many of Minnesota’s bloody victories. Our eyes go from painting to painting as our tour guide gives us an overview of the history of the building and its architect, Cass Gilbert. An original hand-carved mahogany table designed by him sits in the room as well.

As we follow along to the second floor, the guide points out rare artifacts like the flagpole from the Battle of Gettysburg. The House of Representatives Chamber, the largest in the building, is next and it is just as impressive as the other rooms.

And finally the part we’ve all been waiting for, the rooftop! It’s time to see the gilded quadriga up close. In 1906, four golden horses were raised to the roof of the capitol above the southern entrance to the building. They stand bright and shiny overlooking the city, each representing the power of nature: earth, wind, fire, and water.

As the clouds begin to rumble and the wind picks up, it’s almost as if they are welcoming us to the wonderful views of Saint Paul.

So now I am passing along the suggestion of touring one of the most striking buildings in the Midwest because the capitol tour is one of the best things to do in St. Paul.

TIP: Check out the capitol building at night when it is all lit up. It’s another beautiful sight to behold.

RELATED: THINGS TO DO IN MINNEAPOLIS 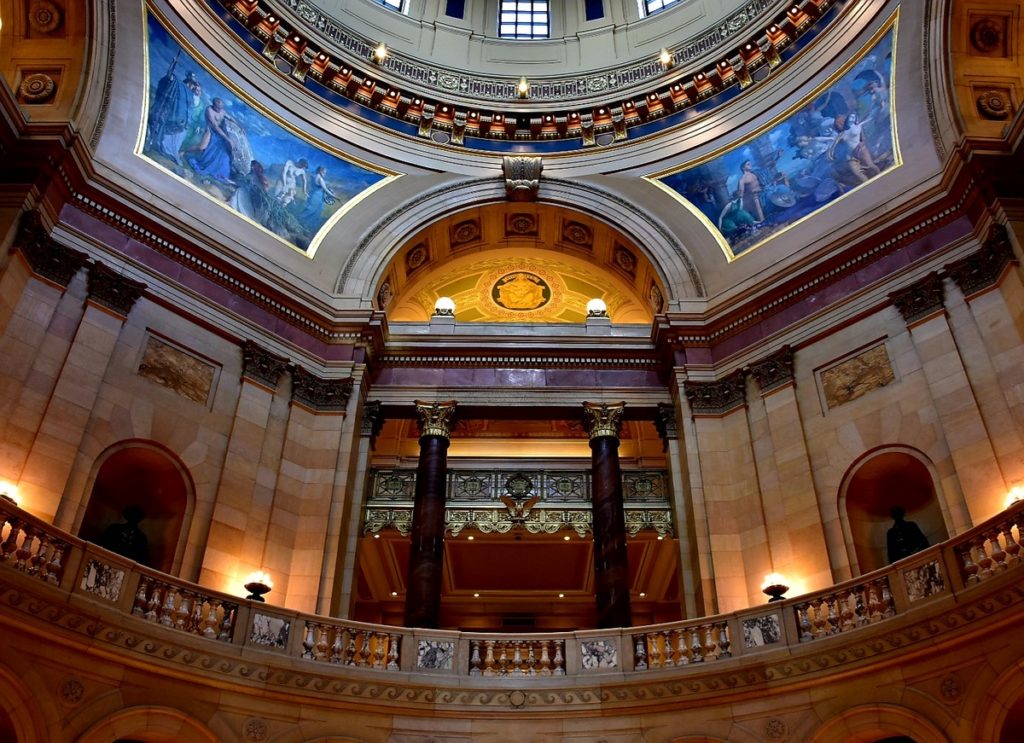 Details: Free tours begin at the top of the hour and last about 45 minutes long. Meet on the south entrance by room 126, the Capitol Information and Tour Center. Rooftop access is only from April through October (weather permitting). There are 63 steps to reach the top and it is not wheelchair accessible.

As we enter through the side door, I can hear a melodic hymn accompanied by the pipe organ echoing against the 186-foot tall dome.

Large stone sculptures and sacred artwork adorn the travertine walls. The cavernous sanctuary is backlit by natural light flowing in from the colorful stained glass windows. 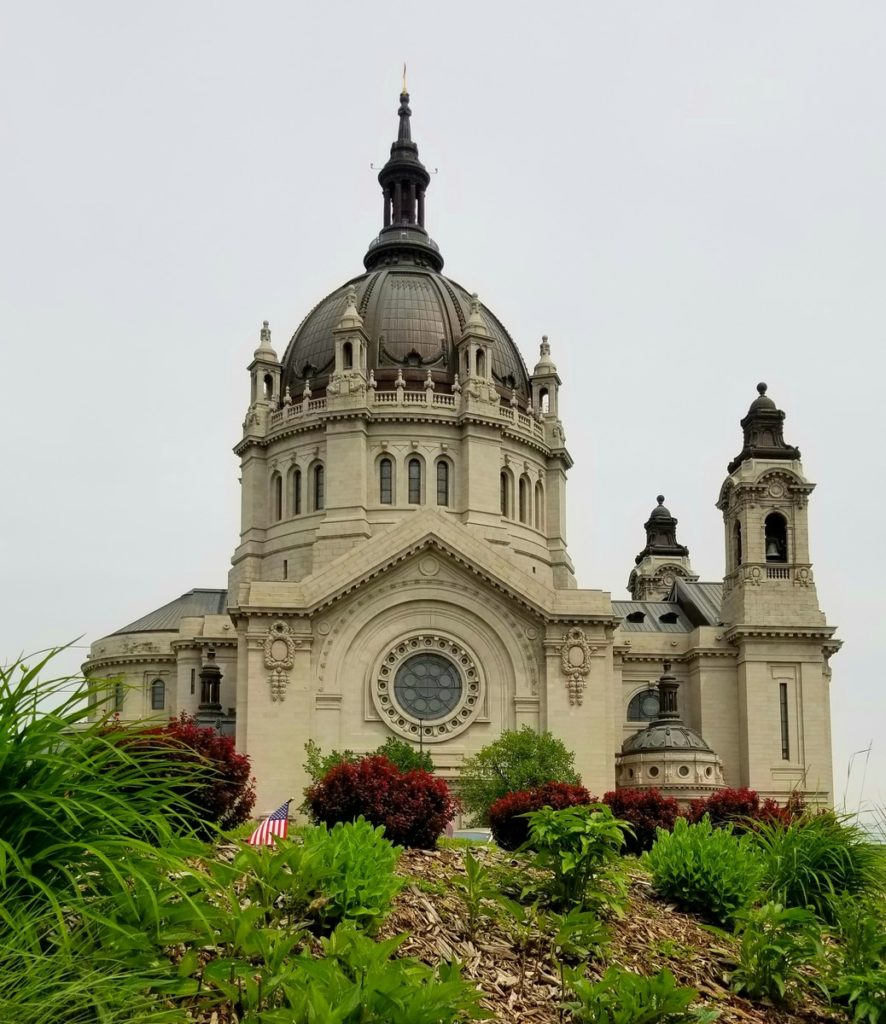 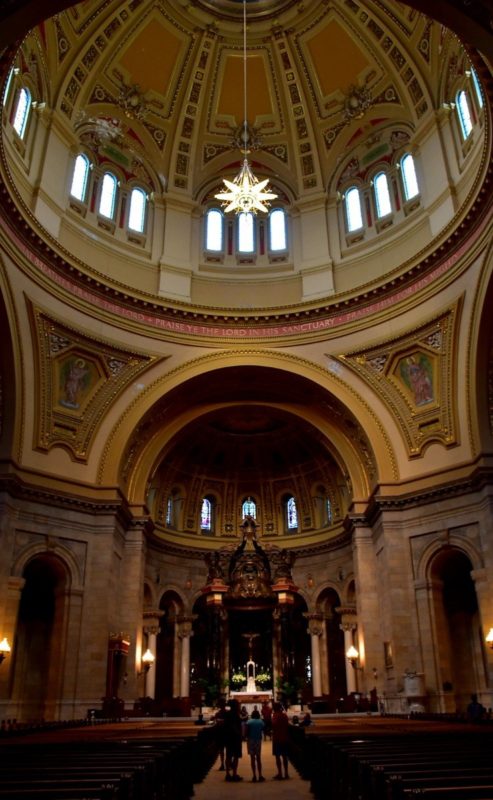 Dome to dome, the John Ireland Boulevard connects the capitol to the stunning Cathedral of Saint Paul. Completed in 1915, the architectural masterpiece is the third-largest church in the nation and is open to the public.

TIP: Inside the cathedral, make sure to walk behind the altar to the Shrine of Nations, where the original European settlers of St. Paul are represented. Statues of the patron saints of each group are depicted in six mini-chapels. 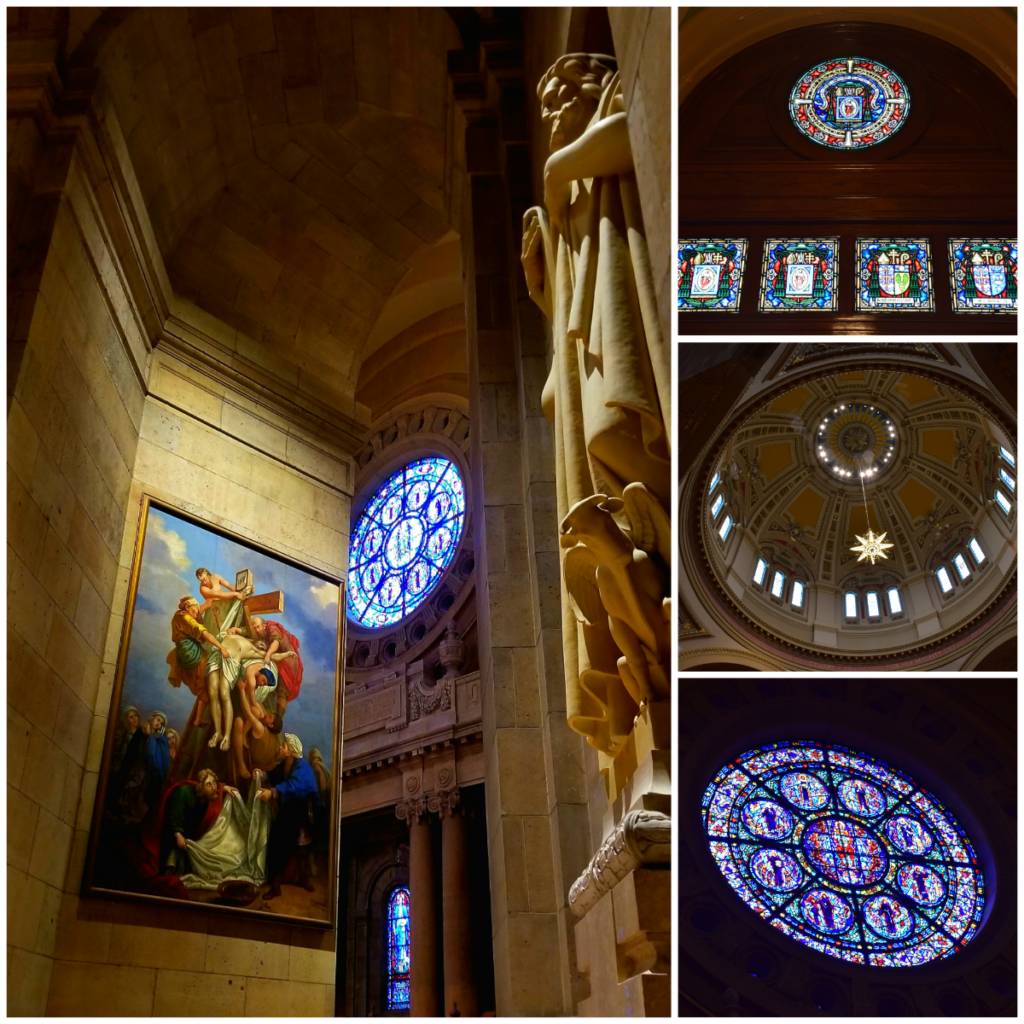 Details: One hour free tours are held every Tuesday through Friday at 1:00PM.

Stretching west to east from the Mississippi to downtown, you’ll find one of the oldest neighborhoods in Saint Paul. Exit the cathedral and head toward the front entrance, turn right, and take a walk down Summit Avenue which has the longest line of Victorian-era homes in the United States. 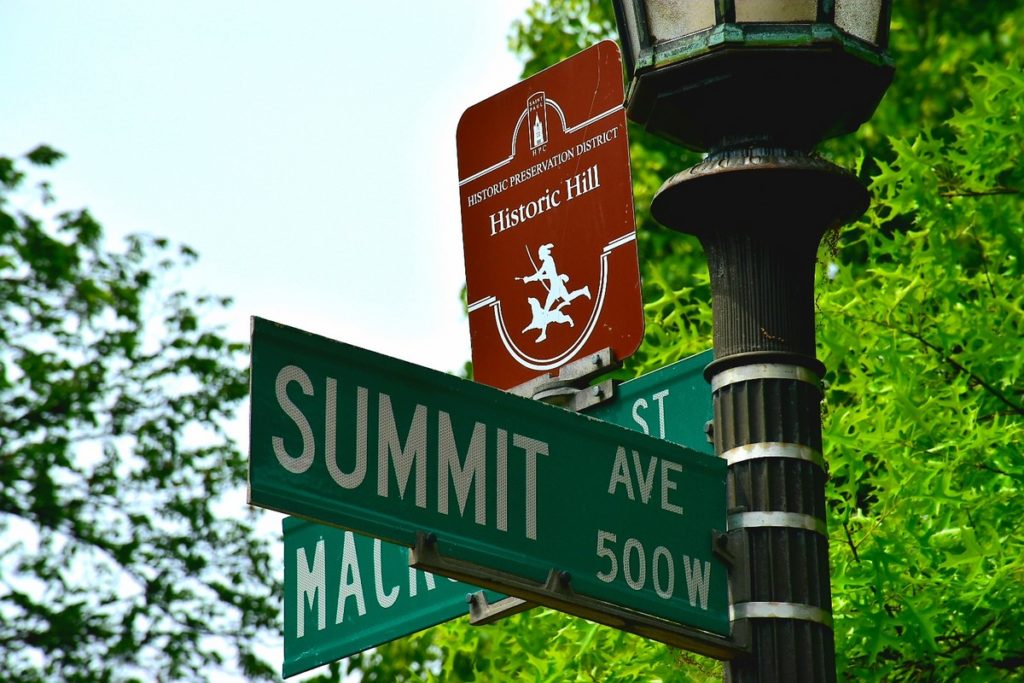 The iconic 4.5-mile street is a throwback to the gilded age when industrial tycoons were among the richest in America. Take a stroll down the tree-lined street to experience 373 of the avenue’s original 440 homes.

The James J. Hill House, once the largest private residence in Minnesota, will kick off your tour of the Historic Hill district. The railroad magnate’s home was completed in 1891 and has been designated a National Historic Landmark. The impressive home boasts five floors with 22 fireplaces, 16 chandeliers, and 13 bathrooms.

Continue along Summit for an unforgettable glimpse into a bygone era. And don’t miss 599 Summit Avenue, the F. Scott Fitzgerald home, another National Historic Landmark. Almost 100 years ago to the day is where the famed author finished his first novel, This Side of Paradise.

Note: I highly recommend a tour of the James J. Hill House offered daily for a fee.

TIP: You can take a walk or bike ride down Summit Avenue yourself, but if you are interested in hearing more about the history take a guided Summit Avenue walking tour with the Minnesota Historical Society.

The last beautiful place on our visit is Lake Phalen, one of the largest lakes in St. Paul. It is the perfect location to stop and recharge from the hustle and bustle of the city, a popular spot for boating, swimming, canoeing, picnicking, fishing, and more.

Come along with us on our bike ride around Lake Phalen!

We enjoyed our stay at the DoubleTree by Hilton St. Paul East. It’s not right in the heart of downtown, but the hotel offers free parking, an indoor pool, well-appointed rooms, and a free shuttle service within 10 miles.

The restaurant and bar has a fabulous Happy Hour with appetizer and drink specials where we found many local beers on tap. Bonus!

*Disclaimer: We were provided lodging by Visit Saint Paul during our stay. All thoughts, opinions, and experiences expressed, however, are my own.*

We explored downtown St. Paul and beyond, have any other suggestions of beautiful places in the area? 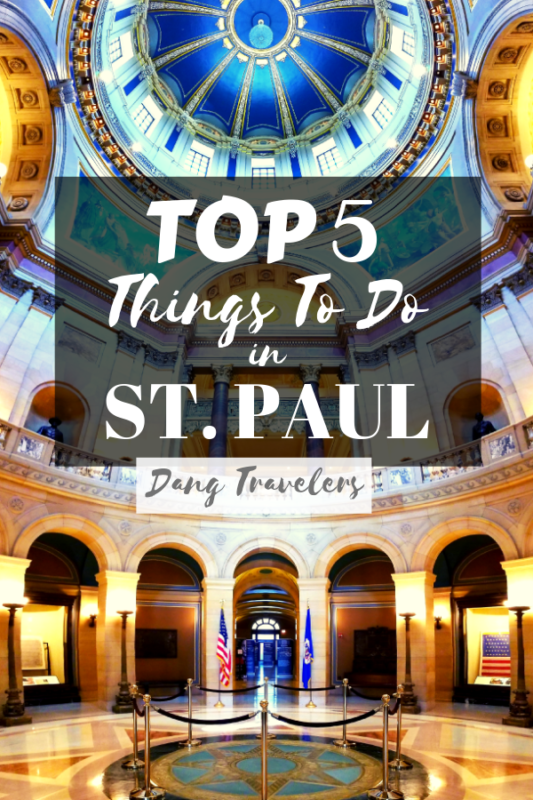 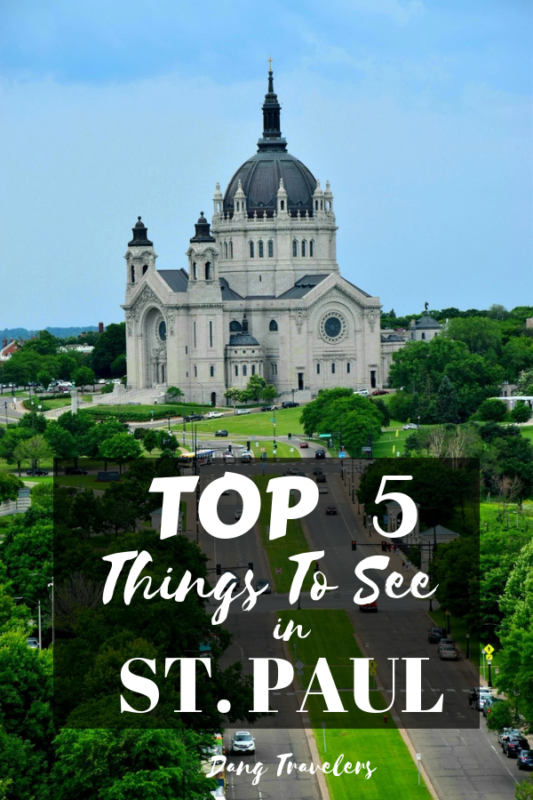