With spectacular festivals and top-notch attractions, San Antonio, Texas is the perfect winter getaway. The best time to visit is November through March when hotel rates are low and temperatures are comfortable.

We visited the first week of December and loved the city’s holiday spirit! Dazzling lights twinkled along the River Walk. Hotels and restaurants joined in the merriment by decorating with lavish Christmas trees, gorgeous wreaths, and colorful lights.

Our lodging for the weekend was at Holiday Inn San Antonio-Downtown on the west side of the city. We picked up the local bus at the airport and it dropped us off a few blocks away from the hotel and we walked and biked the rest of the trip.

No need for a rental car!

READ NEXT: FIND OUT HOW WE PLANNED THE ENTIRE TRIP FOR FREE

The entire town is decked out in lights and festive decorations. We had a blast strolling around town. We couldn’t believe how many buildings, hotels, restaurants and churches were adorned with holiday decor. 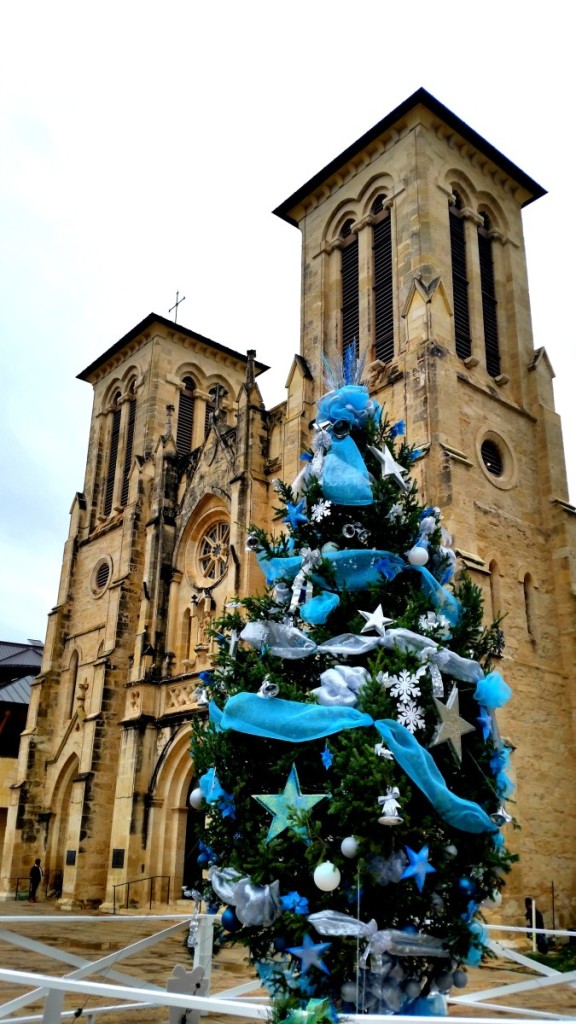 The River Walk is one of San Antonio’s most well-known attractions. It is a pedestrian-only pathway along the banks of the San Antonio River, one story beneath the streets of the city. The network weaves through four separate sections: Museum Reach, Downtown Reach, Eagleland Project, and Missions Reach. The path has been the subject of a decade-long revitalization project for improvement and expansion.

Most people who visit usually only spend time in the Downtown section, but we explored the entire path.

Yes, you read that right!

We walked the north path and rented bikes to ride the south half. If you aren’t feeling up to walking or biking over 20 miles, Rio Cruises also offers a water taxi that has 39 stops along the river.

Getting out of the touristy area and exploring other parts of town was one of our favorite things to do. It’s a cheap way to see the waterfront at only $15 for a 24 hour pass. It works well for transportation if you are staying outside the main area as well.

Although it only runs till 9 PM so if you are staying out late not so much. Museum Reach is the furthest north section, only around 1.5 miles long and includes the San Antonio Zoo, Museum of Art, Brackenridge Park, and the Pearl. The path is lined with interesting visual arts such as the Grotto and a school of giant fiberglass fish displayed underneath the overpass. We were disappointed at first to discover that the Pearl Brewery we saw from the path is not currently a brewery, but a complex of residential apartments, restaurants and shopping. When we first laid eyes on the large sign, Dave was extremely excited that we found a new brewery to try.

Hoping for a free tour, we walked around looking for the front of the establishment. We were so confused when we couldn’t find a door to get in.

A city worker who spotted us and chuckled a little, explained that the area used to be a brewery, but has since closed. We were happy to find the area was an up-and-coming lively neighborhood. My husband was able to get his beer fix when we stopped in The Granary ‘Cue and Brew for some local flavor for lunch. *2020 UPDATE: The Granary has since closed.* Brackenridge Park is a 343-acre public park that houses the Japanese Tea Gardens and the San Antonio Zoo. The Witte Museum and San Antonio Botanical Garden are next to the park. We were ecstatic to see leaves that still had some color even in December. We stopped in the Japanese Tea Gardens to explore and ended up giving our feet a rest as we sipped on some delicious hot tea at the Jingu House. The area is small, but extremely unique with a gorgeous stone pavilion and lush grounds. It is free so definitely worth a stop. We walked through the formal and display gardens, conservatory and grounds of the San Antonio Botanical Garden. A temporary exhibit of ‘larger-than-life’ Lego sculptures were displayed throughout the garden. The downtown section of San Antonio is popular for a reason. There’s something special about eating and drinking under glistening lights while people watching along water. We kept wondering how many drunk people end up in the river after a long night of drinking. The pathway is quite narrow and on the weekends gets mobbed so I’m sure it happens! Thankfully, not to us on this visit. There are various types of bars and restaurants along the path from established and old-fashioned to new and swanky. Our favorites were Durty Nelly’s Pub, MadDog’s British Pub, and The Esquire Tavern. We spent an entire day biking the southern section of the River Walk. We rented our bikes from B Cycle at a station two blocks east of our hotel which was simple and cheap.

Our day began with breakfast at The Guenther House, a restaurant in the King William Historic District. The stone house was built in 1860 and is listed on the Registrar of Historic Places.

The restaurant, along with the rest of town, was ready for the holidays. The outside was speckled with wreaths, bows, garland and lights. Inside was just as impressive with candy houses, poinsettia and Christmas trees. We had to wait to be seated, but they had free coffee, a shop and bakery to keep us busy while we waited. The Mission Reach section is an 8-mile path connecting the historical missions of San Antonio: Mission Concepción, Mission San Jose, Mission San Juan and Mission Espada. The missions were self-sustaining communities established in the 18th century by Spanish settlers looking to colonize the area. They have recently been deemed a UNESCO World Heritage Sight.

From the World Heritage Inscription:

“The San Antonio Missions are an example of the interweaving of the cultures of the Spanish and the Coahuiltecan and other indigenous peoples, illustrated in a variety of elements, including the integration of the indigenous settlements towards the central plaza, the decorative elements of the churches which combine Catholic symbols with indigenous natural designs, and the post-secularization evidence which remains in several of the missions and illustrates the loyalty to the shared values beyond missionary rule. The substantial remains of the water distribution systems are yet another expression of this interchange between indigenous peoples, missionaries, and colonizers that contributed to a fundamental and permanent change in the cultures and values of those involved.” Finally, our day ended with 100% organic beer and dinner at Blue Star Brewing Company. They had a few sour beers on tap which my husband fancied. I’m not a fan of sour beer in general, but I enjoyed the Cinco Peso, Cow Town, and Pilsner. The Alamo (Mission San Antonio de Valero), also included as a UNESCO World Heritage Site, extends into the historic Mission Trail. Its history dates back to the early 1700’s as a mission, but is infamous for the 1836 Battle of the Alamo during the Texas Revolution. General Santa Anna marched from Mexico to Texas to enforce order and compliance. His forces killed 189 Texan defenders and later executed more than 342 Texan prisoners at the Goliad Massacre. The defeat was a major loss for Texas, but eventually the state was freed from Mexico’s tyrannical grip. The Market Square is a lively public market that has been opened for over 100 years. The plaza is closed off for pedestrians only and here you will find numerous restaurants, shops and galleries with Spanish flair. It’s a great place to find reasonably priced souvenirs. It is also the place where we found one of the quirkiest and colorful restaurants we have ever seen, the Mi Tierra Cafe. It actually made our list of Quirkiest Restaurants in the US. It is decorated year-round with Christmas lights and vibrant murals.  I wouldn’t recommend eating dinner here (just so-so), but maybe stop in for a drink or for breakfast pastry. Disclaimer: This post contains an affiliate link, if you book through our link we will receive a small commission at no additional cost to you.

Where is your favorite place to visit to escape the cold?