One of our first experiences during spring break with the nephews is at Dolly Parton’s Stampede. Deemed, “The most fun place to eat in Branson,” I can’t argue. It is adult and kid-friendly entertainment all around; a perfect attraction for the whole family!

There are two locations where you can find the ‘World’s Most Visited Dinner Attraction’ – Branson, Missouri and Pigeon Forge, Tennessee. And not only will Dolly Parton’s Stampede be celebrating their 25th anniversary this year, but this spring they will also serve their 10-millionth guest!

As we drive past the big yellow building with green shutters to find a parking space, I mention to the boys that it looks like an old southern plantation home. I figure now is a good time to explain to them that the show has a friendly competition between sections, the north and the south.

Which side do you want to be on? One says north, the other says south. Of course, both of them pick opposing sides.

We’ll find out later but for now, let’s see if we can meet some of the horses and riders. As we make our way down the Horse Walk along the open-air stables, there are a few great photo opportunities. The excitement and anticipation for the night ahead of us is building as we see beautiful horse after horse.

KEEP SCROLLING FOR COUPON INFO & TIPS FOR YOUR VISIT

After the Horse Walk, we pick up our tickets and head inside for the opening act in the Carriage Room. Before finding a seat, we pick up souvenir boot mugs filled with refreshments. Make note, Dolly Parton’s Stampede does not serve alcohol which is another reason I think it’s a perfect thing to do with kids while in Branson.

All four of us clink our spurs together to cheers to a good night before the White River Wranglers hop up on the stage in the middle of the room. The three brothers have been playing music together for almost forty years and you can tell they love what they do. They had the crowd laughing and singing along to country tunes, rock and roll classics and some bluegrass before being led into the big arena for the show.

READ NEXT: TOP THINGS TO SEE AND DO IN SPRINGFIELD, MISSOURI

Dolly Parton’s Stampede in Branson is not your average dinner-and-a-show night out; the performance is interactive, funny, and fast-paced. In the beginning, the competition between sides is announced just like I told the boys. We are seated in the “north” section so red is our color and any time a cowboy or cowgirl gallops by, we cheer!

Throughout the evening, we see long-horn cattle, a group of buffalo, racing pigs and children herding chickens. It was non-stop action with the crew performing daring tricks, horses jumping though flaming hoops and even a few acrobats hanging from the sky.

And literally, foot-stomping fun – since our hands were always full with some kind of food we are able to hoot and holler while stomping our feet instead of clapping our hands.

There’s never a dull moment with pyrotechnics on one side and covered wagons on the other; there’s singing and dancing with a little comedy relief in between.

And at the end, it is announced it doesn’t matter what side we are on because we are part of one nation. The show ends with a spectacular celebration of the spirit of America.

As the lights dim and we settle into our seats, the waitress starts us on our huge four-course meal right away. She brings our choice of drink between coke, lemonade, tea or coffee. Then throughout the show, we enjoy creamy vegetable soup served with a homemade biscuit, a whole rotisserie chicken, hickory-smoked barbecue pork loin, hot buttered corn on the cob, herb-based potato, and an apple turnover for dessert.

It is so much food, none of us finish our meals. Which means no cooking for me tomorrow, leftovers for dinner!

How Long is Dolly Parton’s Stampede?

The entire experience at Dolly Parton’s Stampede is around three hours long. The show itself is about an hour and a half, but I highly suggest arriving an hour and half early to stroll the horse walk, take pictures, pick up tickets, and to enjoy the preshow.

Discounts are offered to Active Duty Military and Veterans. Military reunions may also receive a complimentary Memorial Ceremony that honors the fallen member of their group.

Students also receive specially priced admission at dedicated youth events. And student band and choral groups may schedule a performance at the Carriage Room stage in-the-round which is free with a paid group admission.

Where Can I Find Dolly Parton Stampede Coupons?

Check the Travelhost Magazine, found in most hotel rooms in Branson. And special package offers may also be found on the Vacation Packages page on Dolly Parton’s Stampede’s website, with lodging and other area attractions such as Silver Dollar City.

Disclaimer: I was provided tickets by Dolly Parton’s Stampede, but all opinions above are 100% my own and influenced in no way.

Have you ever been to Dolly Parton’s Stampede? What was your favorite part?

Save It for Later! 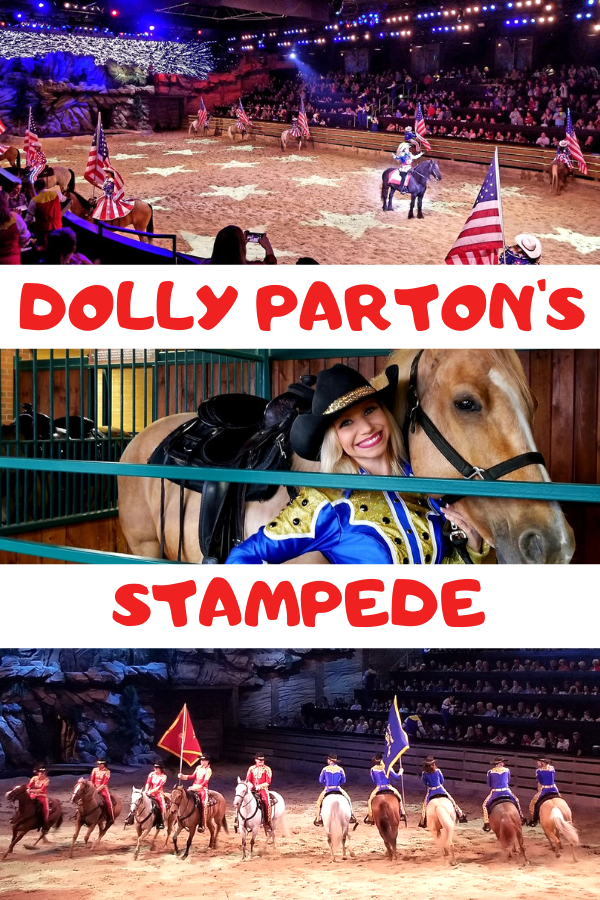 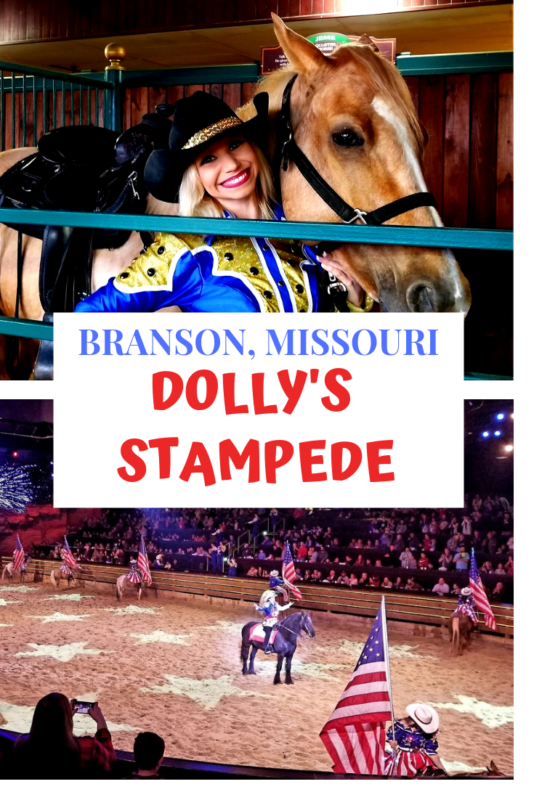